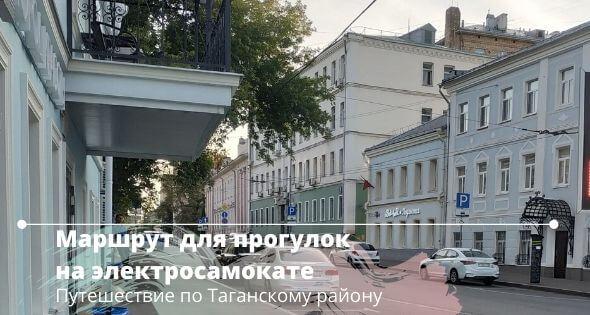 Joining the hero of the movie “Garage” and I want to add “when this bodywork is over, let’s go” to ride electric scooters in my native area. During the time of self-isolation, they missed him very much. I hope it will be spring yet. In the first greenery, my former but native, Tagansky district is especially good.
I usually park on Vysotsky Street or Teterinsky Lane, parking here is 80 rubles per hour. Of course, you can also start a walk on an electric scooter from the Taganskaya metro station, as it is convenient for anyone.
I am greeted by Batashev Manor (11 Yauzskaya Street). A bright monument of Moscow classicism, luxury and wealth. 2 outbuildings, the main building, and the church have been preserved. Unfortunately, the beautiful fence is almost lost. So far, the original, complex decor of the buildings built in 1978 has been preserved. The name of the author of the masterpiece is not known. Some historians say that this is the last project of V. Bazhenov. Others are inclined to R. Kazakov. There is an opinion that this is the work of the Frenchman Charles de Valli (who built Kuskovo). I take my time rolling on an electric scooter and inspect all the buildings. During the day, you can get into the shady garden.
I’m going on. 2 minutes and my electric scooter rushed me already to Kotelnicheskaya high-rise. Treatises have been written about this building, and after making a circle along Novoyamskaya , I go to the other side of the Earthen Rampart.
I get to Sergeyevskaya Church and then the variety of routes stops only fantasy. All the alleys and streets are architectural masterpieces from the 14th century to modernism. It is especially pleasant to ride an electric scooter in this area, on smooth and wide sidewalks. There are always not many pedestrians here. I like to stop by Comrade Lane and look into the bottomless arch of the 20th house. School Street has been restored. Now Rogozhskaya Zastava is here again. This may perhaps be the most crowded section of the route.
I am returning by electric scooter along Bolshoy Torchlight Lane. Tagansky Children’s Park passing by. Not a very convenient place for walking on an electric scooter.
On There are many cafes on the Lower Radishchevskaya street where you can recharge an electric scooter and have a snack.
The route is designed for 1.3-2 hours, which is optimal for charging any electric scooter. And for travelers it will give an opportunity to relax and not get tired.