New changes to the draft traffic regulations for electric scooter 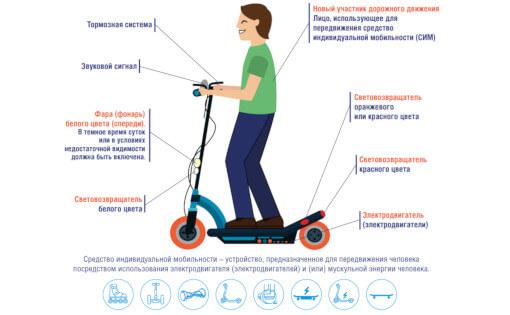 New traffic regulations appeared on April 30 on the website regulation.gov.ru , they also touched on electric scooters, as part of the definition of SIM (means of individual mobility).

The roadside can only be used for driving on an electric scooter (SIM) if there is no other possibility of movement, or movement along the remaining sections of possible traffic is difficult.
The right edge of the road can only be used if:
– there are no bicycle and bicycle pedestrian paths, a lane for cyclists, a sidewalk, a pedestrian path, a curb, or there is no possibility to move along them or along the roadway of the bicycle zone;
– the road is not a motorway and the movement of vehicles with a speed of no more than 60 km/h, as well as the movement of bicycles, is allowed on the road;
– the means of individual mobility is equipped with an electric motor (electric motors), a brake system, a sound signal, white–colored retroreflectors on the front, orange or red on the sides, red on the back, a white-colored headlight (lantern) on the front, which must be turned on at night or in conditions of insufficient visibility – our electric scooters fully meet the data requirements.
The movement of persons using gyroscopic–stabilized means of individual mobility for movement along the right edge of the carriageway is not allowed (with the exception of bicycle zones).
It is possible to move along the right edge of the road on an electric scooter only in 1 row, overtaking from the left is prohibited.

Movement in the dark should be carried out with the lights on .

Speed limits for electric scooters remained unchanged:
– 20 km/h – in pedestrian zones and on sidewalks.
– 60 km/h – on the side of the road or on the right side of the road.

We will hope that the self-isolation regime will be canceled soon and we will be able to enjoy a walk on an electric scooter. In the meantime, it’s time to take care of preparing the vehicle for the season. Learn more about our electric scooter repair shop here.
Those who have movement passes can use our electric scooter rental.
Good mood to everyone! We will follow the development of initiatives in traffic regulations further.
The photo for the post is taken from the brochure of the Ministry of Transport.